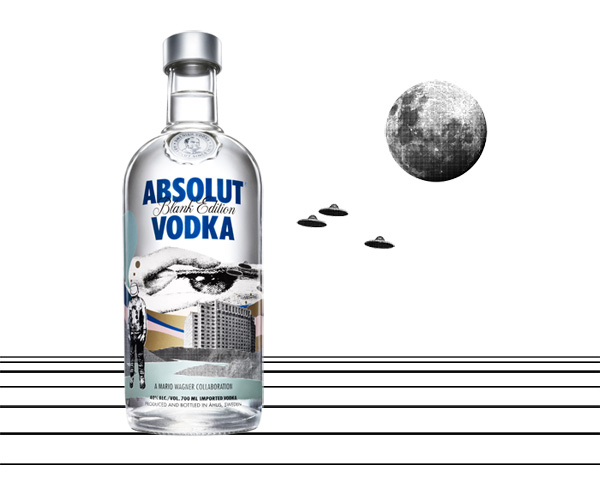 “Being one out of 20 artists to participate in the ABSOLUT BLANK creative movement was very inspiring. ABSOLUT gave us great artistic freedom, and I loved meeting artists from other countries and different creative disciplines. Therefore I was thrilled when I got the opportunity to extend my collaboration with ABSOLUT by creating my own bottle,” says Mario Wagner. “The bottle design is very personal to me, as it expresses my fascination with the idea that we might not be alone in this universe!”

Wagner’s bottle is inspired by the visual language of the 1960s, an era in which the space race and travelling to the moon captivated the world. To ensure continuity, he used some of the visual elements that were also in his artwork for the ABSOLUT BLANK campaign.

“Each visual element has its place,” Wagner explains. “The astronaut is a recurring visual element in my work, and it creates intrigue to the overall piece. With an empty speech bubble I give a voice to the astronaut, but I let the audience decide what he says. There are also celestial bodies, UFOs and the allseeing eye, which represents a person looking at the world from another dimension or place in time.”

“Mario Wagner has created a captivating and imaginary piece of art, and a bottle that will stand out on the shelf. Creating a unique bottle was not part of the initial plan, but we love it when our collaborations evolve into something new. This project beautifully shows how creativity leads our brand forward,” says Mathias Westphal, Global Brand Director at The Absolut Company.

ABSOLUT BLANK is an ABSOLUT collaboration where 20 artists were given a literal ABSOLUT blank bottle shaped canvas, and asked to fill it in with their creativity. Mario Wagner was one of the artists featured in this campaign. His work has been showcased in print, outdoor advertising and TV.