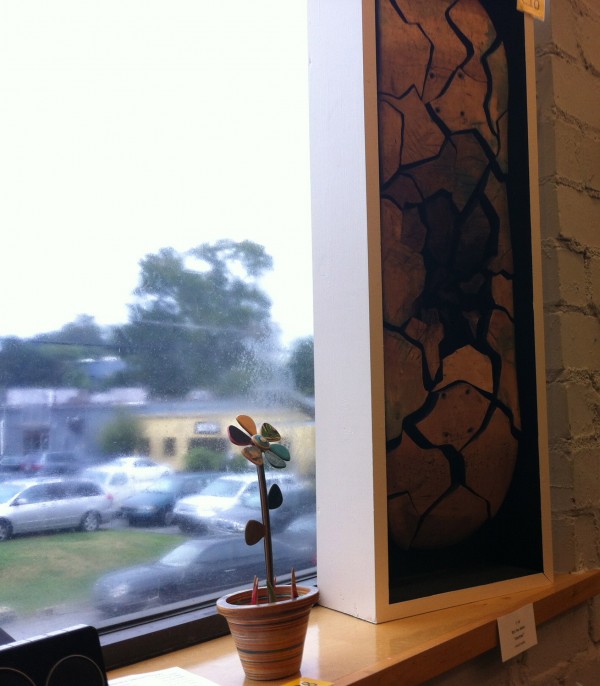 Rain or shine, last month’s SkaterAid topped previous success with one hundred and four works of art auctioned for a local cancer charity. This grassroots event benefits the Children’s Brain Tumor Foundation with a day full of art, music and of course shredding at the skate-park.

My themed entry was inspired by how the environment remains a hot issue while also being a relegated priority, driven by perspective, often drummed up, politicized, then shelved. In 2010 my first entry to SkaterAid was a somber revisit to the Gulf Oil disaster and Hurricane Katrina, this years piece has an emphasis on our energy choices from the sea turtle point of view. Titled “Tar Ball Cafe” the piece contrasts our perspective on structures, as sea weed climbs and morphs into oil derricks the ocean reflects our choices on wind and solar. This summer Shell had planned to drill five wells in the worlds smallest ocean, The Arctic Ocean, making me wonder how many man-made disasters equates to a wake-up call?

What I love, and would rather rant about, are the good vibes from SkaterAid charity mainly the sense of community and no pressure attitude for artists who don’t stress over clean submissions on canvas instead taking off the shackles to try on the world of found art and skateboard design.

May the Title be with You

“James illustrative work is driven by his passion for the craft. Although James possesses countless illustrative abilities, I find that he has a real niche for what I would describe as an abstract, hyper-realism. I commissioned James to create a very stylized title for me to use within my Youtube web series comedy sketch, "Hoop Conspiracies: Boston". James was incredibly easy to work with and not only captured my envisioned concept, but greatly surpassed my expectations. James Hartzell is an excellent illustrator with an extremely wide range of diversity and I highly recommend his art.
— Harrison Tedoff, Tedoffski Films

James is a St Pete, Florida based freelance Illustrator and sign painter. 2009 graduate of Savannah College of Art and Design (BFA Illustration), his work has strong roots in traditional drawing and painting. Volunteer work and soccer coaching are big passions outside of the art world.