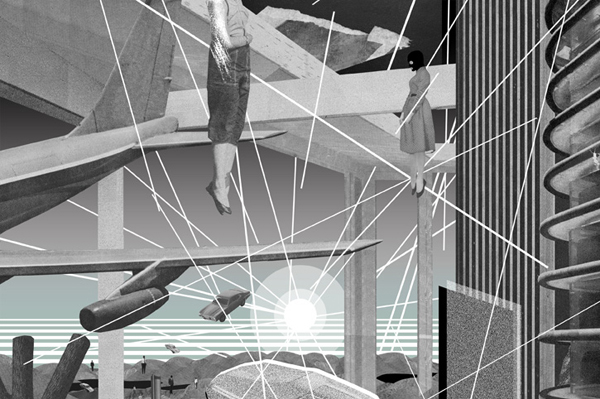 Memory Palace is a walk-in story that brings to life a new work of fiction by the author Hari Kunzru.
This narrative world is visualised through a series of commissions by 20 internationally acclaimed illustrators, graphic designers and typographers.

The story is set in a future London, hundreds of years after the world’s information infrastructure was wiped out by an immense magnetic storm. Technology and knowledge have been lost, and a dark age prevails. Nature has taken over the ruins of the old city and power has been seized by a group who enforce a life of extreme simplicity on all citizens. Recording, writing, collecting and art are outlawed.

The narrator of the story is in prison. He is accused of being a member of a banned sect, who has revived the ancient ‘art of memory’. They try to remember as much of the past as they can in a future where forgetting has been official policy for generations. The narrator uses his prison cell as his ‘memory palace’, the location for the things he has remembered: corrupted fragments and misunderstood details of things we may recognise from our time. He clings to his belief that without memory, civilisation is doomed.

The exhibition takes place in the V&A’s Porter Gallery