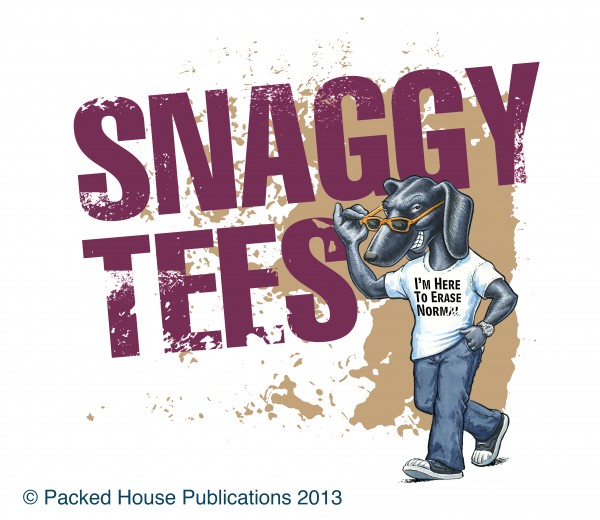 Packed House Publishing needed a logo for their T-Shirt business – Snaggy Tees. The brief was to incorporate a T-shirt wearing, anthropomorphic dog. As an initial response I pitched in a whole slew of doggie faces for feedback. The core business is men’s shirts, so, logically, I did quite a few blocky, masculine dogs. However, amongst other breeds, I dropped in a dachshund, probably the least ‘blokey’ dog I put forward. A few years ago I did a plate for Danbury Mint in Connecticut which included twelve dachshunds, so I was familiar with the shape.
That familiarity must’ve worked because the masculine animals were all trounced by the sausage dog. The final appearance was ‘tuned’ slightly at pencil stage, but I still think there’s an element of dachshund about him. Once I had a head to hang the body from, all the rest was plain sailing and the client was delighted with the result.

A Night on the Tiles ̵…

Pins and needles kept me o…

On Holiday with Crazy Cat …

The Waif – an exerci…

Bringing out the Christmas…

The Pied Piper of Hamelin

The Sky is Falling!

“"I met Pete through Hire an Illustrator some time back. He was hired to create characters for a children’s product. His work surpassed all of my expectations. He was thorough and professional, and made collaboration easy. Pete has since been rehired several times for various projects and is an integral part of the company. His consistency, timely results, and absolutely exceptional work are unparalleled. He brings valued input, feedback, and creativity that has propelled this brand’s development. We would not be where we are without him.”
— John Haber, Nogginsland Inc.

An illustrator specialising in art for children's books, design solutions, advertising and editorial features. Much of my work is produced using traditional methods, however, digital processes are increasingly employed.