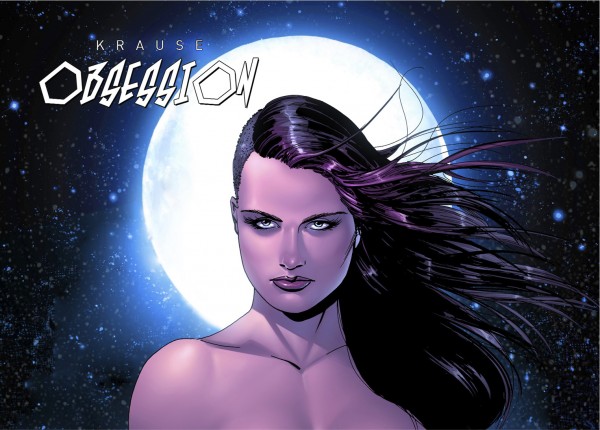 I recently did this cover for a single, the image is based on the recording Artist Krause. The single is out tomorrow.

On September 19 electropop diva Krause releases a cover of ‘Obsession’, of which the original was a big hit in 1984 by the American synthpop group ‘Animotion’. The track will be released as a free download which you can access through a ‘social unlock’ on Krause’s Soundcloud and Facebook page.

Krause has given the track quite a different flavour together with producer Mike Luck, one half of producerduo Majestique that has made quite an impression with their single ‘Must Get There’ this summer. The tempo of the track is significantly slower than the original and the raw sounds and yearning vocals make it a dark and sultry track. The artwork of the single has been made by John Royle, a notable illustrator who draws for Marvel Comics and IDW amongst others.

Moshi vs Furby for the Tel…

The Miracles of Jesus illu…

Comic Book Artist
Manchester, United Kingdom
Tel: +44 (0)7807124106
www.johnroyleart.com/…
I have worked as an illustrator for over 20 years. I have produced artwork for many Advertising campaigns, magazine covers / illustrations and Comic books including Spider-man, Wol… Show more.

I have worked as an illustrator for over 20 years. I have produced artwork for many Advertising campaigns, magazine covers / illustrations and Comic books including Spider-man, Wolverine, X-men, Robin, Danger Girl G.I.JOE and Stan Lee's Alexa. Please note I no longer take on full art interior 22 page comic book issues.