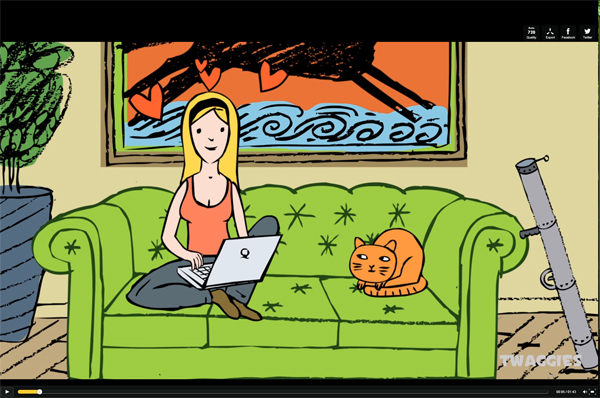 Episode no. 101, the pilot episode of a brand new series featuring animated Twaggies is now live! What’s a twaggie? It’s a cartoon made from a tweet. We’ve been doing this since 2009 and have turned more than 1000 tweets into hilarious cartoons.
Now, in partnership with Dailymotion, we’re thrilled to present animated Twaggies. Each episode will be grouped around a theme. Today’s theme is grammar nazis, for all you smart folks who hate when people make ridiculous grammar mistakes.

You can watch the episode at the link below!

Poster for the 16th Intern…

Here's what people have to say about my work: "whimsical" "wonderfully weird" "great work" "charming style" "childlike view" "very trade and fun" "love your animal characters" "cute" "wonderful" "WOW! WOW! WOW!" "I am all smiles with this one." "sweet imagination" "terrific" "fantastic""fun characters""lively art""really wonderful exaggerated imagination""really appealing style + sense of humor""great perspectives, use of color & texture.""incredible work""your line drawings are charming.""really great work!!""Cute picture and fun idea!""wonderful""I love your work.""the stuff on your website is phenomenal! Beautiful, rich illustrations with fun, engaging concepts. Some of the best stuff I've seen in a while." "terrific""refreshing"