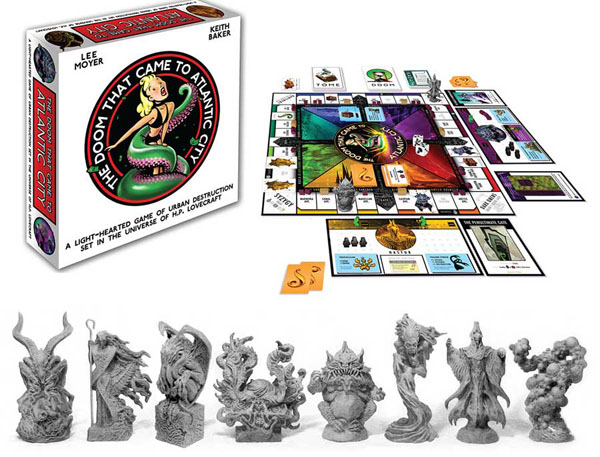 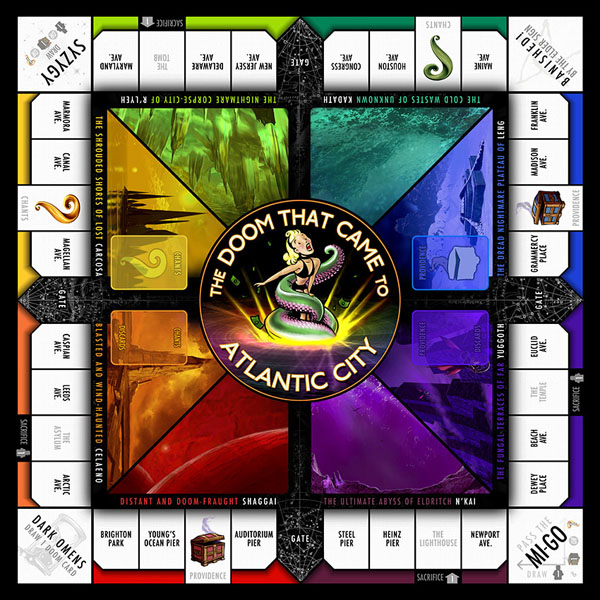 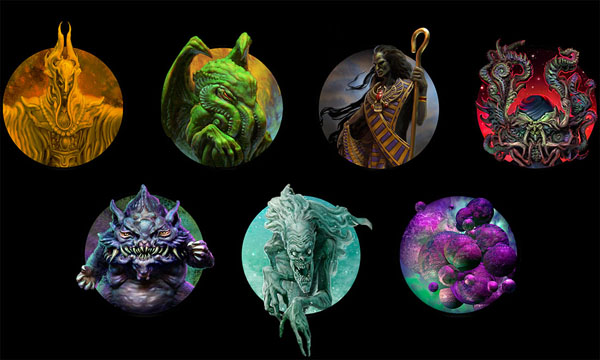 My game “The Doom that Came to Atlantic City” with designer Keith Baker and with playing pieces by Paul Komoda was successfully kickstarted but then cancelled by it’s publishers. After being rescued by Cryptozoic, it is now available for purchase and playing.

A lighthearted game of destruction, players assume the role of one of the Great Old Ones – beings of ancient eldritch power like Cthulhu and Hastur, the King in Yellow. Cosmic forces have held you at bay for untold eons, but at last the stars are right and your maniacal cult has called you forth. Once you regain your full powers, you will unleash your doom upon the world! There’s only one problem: you’re not alone. The other Great Old Ones are here as well, and your rivals are determined to steal your cultists and snatch victory from your flabby claws! It’s a race to the ultimate finish as you crush houses, smash holes in reality, and fight to call down The Doom That Came To Atlantic City!

Read more about… The Doom that Came to Atlantic City

Game Art and Design for Cu…

Classic Illustration for Product and Entertainment. Clients include, Sony, Fox, Paramount, EA, Hasbro, BBC, Guardian UK, Forbes, and the Smithsonian Institution where he was a docent and Naturalist Illustrator. Moyer’s approach to collaboration is rooted in deep knowledge of illustration and design history and respect for the subject matter, no matter how outré. Among his acclaimed posters are world premieres for Stephen Sondheim and Stephen King, as well as art for Tori Amos and Amanda Palmer. His film work includes six Laurel & Hardy titles, Spider-Man 2, and H. P. Lovecraft's classic Call of Cthulhu. In collaboration with Ray Bradbury, George RR Martin and Neil Gaiman, Moyer designed and painted a trio of literary calendars that not only illuminated their distinct visions, but also raised six figures for charity. He has won many awards and been featured in many Illustration anthologies and annuals. His games '13th Age’, 'The Doom That Came to Atlantic City’ and ‘Cursed Court’ are available at fine game stores everywhere. A popular speaker at colleges and conventions, his essay 'The Elements of Illustration' and his 'Kickstarter White Paper' are widely read. His 'Infamous Bad Book Cover Show' played to an SRO crowd and a command performance recently in Helsinki, Finland. His art has been exhibited galleries in New York City, Los Angeles, and London. Lee is based in Portland, Oregon.