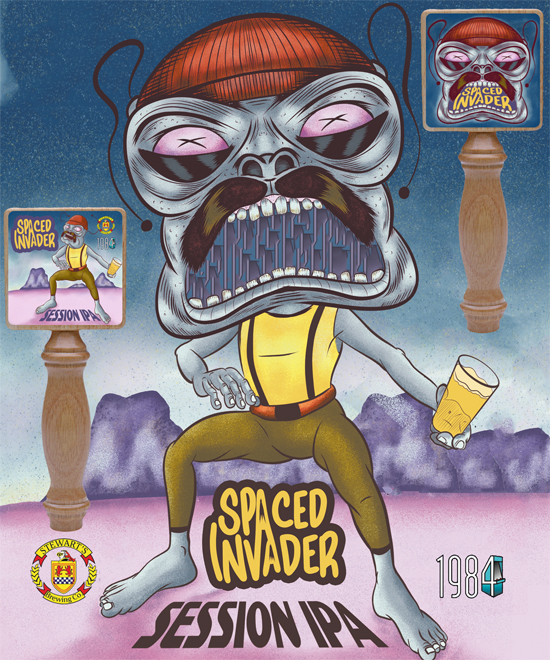 A few weeks ago I (along with other local Delaware artists: Kristen Margiotta, Greg Fischer and Sean Flynn) were asked to design tap handles for a collaborative beer between 1984 (a Wilmington, Delaware bar specializing in arcade games and craft beer) and Stewarts Brewing Company (a Bear, Delaware brewpub). The beer is called Spaced Invader and it’s a session IPA that was released on Friday, November 7th, 2014 at 1984. The four custom tap handles will be switched out and rotated for the duration of the beer’s time at the bar. In addition to the tap handle that I designed, I put together a limited edition 8″x10″ print on 100lb True White speckletone French Paper that is available now in my store.

The Shipwreck of Captain M…

Pat Higgins is an award-winning illustrator, cartoonist and graphic designer from Delaware. Throughout his career, he has had the opportunity to work for a wide variety of clients and agencies; both in-house and as a freelancer. In addition to client work, Pat has led workshops and showed his work in galleries across the United States. He also co-hosts the monthly Oddball Art Hall in Wilmington, Delaware and is a member of the National Cartoonists Society. Pat’s recent books include, The Family (2019), The Shipwreck of Captain MacNamara(2018), Elroy’s Big Adventure (2018), and The Android’s Bewildering Conflict (2017). Pat majored in Illustration at the Delaware College of Art and Design and is also a graduate of the Visual Communications program at Delaware Technical and Community College.