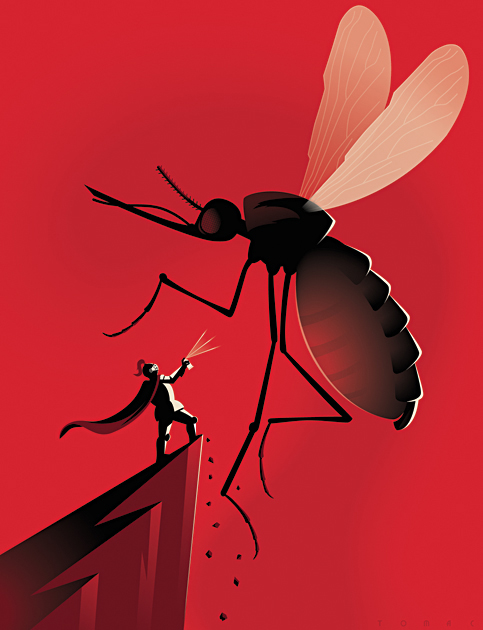 How many years have you been a freelance illustrator?
I turned in my first illustration job at the end of March 2003, a couple of months before I finished college. That means I’m creeping up on 12 years as a working, professional, illustrator.

For most of that time I held down a design job, too. I’ve worked at a couple of daily newspapers and a business magazine. At first, it was a way to supplement my income as an illustrator. My work wasn’t that good and I didn’t do a great job marketing it right after I finished school. I had the good fortune at a couple of these places to do a lot of illustration work in house. I also got to play art director and hire other illustrators. My work got a lot better because of those experiences.

What can your work be applied to commercially?
The majority of the work I do tends to be for editorial clients – newspapers and magazines. I enjoy the challenge of coming up with ideas and turning around the work quickly. I get the biggest thrill from coming up with a good idea. A solid solution to a problem is often the best motivation to sit down and finish a piece.

There’s also something satisfying about seeing an image in print the morning, or a couple of days, after I’ve been working on it. I guess it’s instant gratification.

Where would you most like to see your illustrations being used?
The downside to most editorial work is that the lifespan of it is very short. I’d like to do more work that has some permanence; things that won’t be gone in a day or week or month.

What inspires you?
I like clean lines and bold colors. The work commissioned by the U.S. government during the 1930’s as a part of the Works Progress Administration is a favorite. I enjoy the work of illustrators who were working during that time and beyond. People like Joseph Binder, Antonio Petruccelli, A.M. Cassandre, Jean Carlu, Edward McKnight Kauffer and Paolo Garretto. I’m also a fan of the Precisionist painters.

I grew up near a highway that was built during the Great Depression. All of the overpasses were designed in the art deco style. That may have planted the seed for a lot of the work I’m drawn to. Even now, I live in a place, New York City, with a ton of buildings, large and small, that were built during the same time. It’s a treat to walk into a building and see a mural or catch a glimpse of a gargoyle from that era.

Apart from illustration, what other skills do you have?
I used to be a pretty good distance runner. I was the captain of my college’s cross country team. I still run quite a bit. I’ve finished a few marathons. But, I’m nowhere near as fast as I used to be. Work and being a dad take up a lot of the time I used to have to devote to it.

What’s your favourite sandwich filling?
Pastrami on rye with sauerkraut and Russian dressing.

Does Covid-19 mean the end…

The War on Carbon Emission…

Beating Trump for The Los …

The Path to Congress for T…

They see what you’re…

Up the Middle for HistoryN…

Would you buy a luxury wat…

Can we be saved from socia…

Jetting Away for The Wall …

Those Who Knew for The Bos…

House of Horrors for The B…

Making Memories with the U…

The Future of Work for For…

Bear Market Quiz for The W…

Eyeing all the job candida…

Memoirs of a Pizza Boy for…

The Year We Skipped Christ…

John W. Tomac is an illustrator who specializes in creating conceptual images with a little bit of mid-century styling. John grew up in Stratford, Conn., earned a Bachelor of Fine Arts degree at the Rochester Institute of Technology, and currently lives and works in New York with his wife, two sons and one-eyed chihuahua.