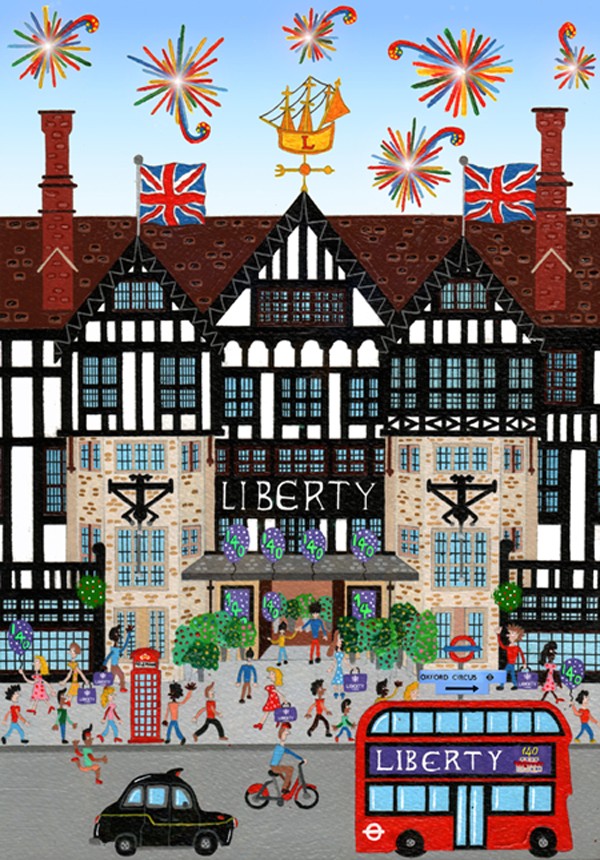 I can finally show you the Liberty London commission I produced just over a week ago. I was approached by the legendary Department Store to produce an illustration of their iconic building in Regent Street for their 140th birthday celebrations. The aim was to portray the beautiful store front, while showing off all things typically “London”, as this will be used in advertising aimed at tourists. As you can see I’ve included a classic London red bus, a black cab, and even someone on a Boris bike! The stylised fireworks in the sky represent a design pattern Liberty themselves will using for their own print. I had so much fun painting this, and it was a privilege to work for a such a highly esteemed client.

View of Mount Fuji from Ch…

Manhattan in the 60s

I own the night….

Illustrator
Borehamwood, United Kingdom
Tel: 07901696738
www.mohanballard.com
Colour, colour and colour! This is what I feel best describes my work. I feel this is a reflection of me and my personality! I first discovered my style during University, at South… Show more.

Colour, colour and colour! This is what I feel best describes my work. I feel this is a reflection of me and my personality! I first discovered my style during University, at Southampton. It was here I was taught to express myself through vivid and vibrant scenes while also exploring how to pack my images full of features and people. After university I carried on with this style and I really feel I have brought my style and technique forward. The child-like drawn people and bright colours add a sense of enjoyment to the image, and I just want my images to breed happiness and smiles. Every image I create is made with a passion and energy I feel that cannot be found just anywhere. I feel so lucky and priviliged to able to produce images like this for other people and the happiness they get by enjoying my images makes me proud to be an Illustrator. I am available for Commissions and requests for work of all kinds and am happy to answer any questions you have, so get in touch!.