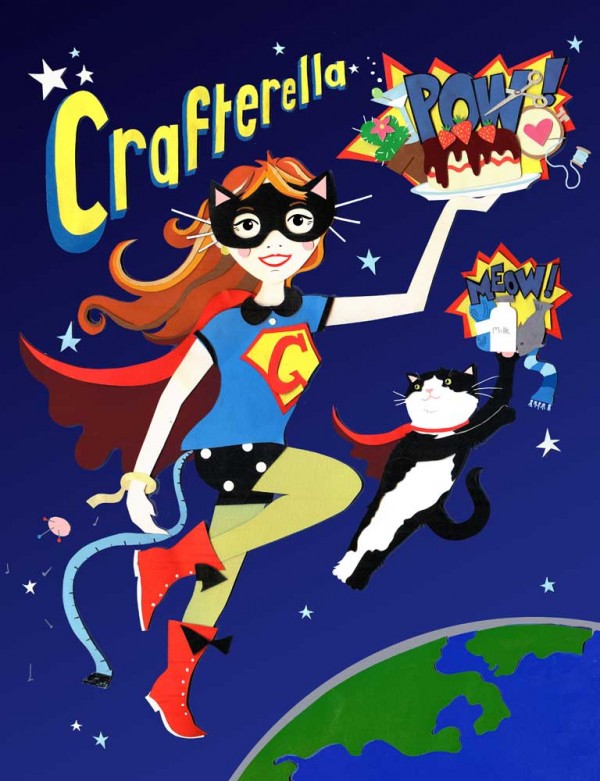 I recently created this colourful craft illustration for the blog Cut Out and Keep. Some time ago, I was approached by them to have a feature on my work in something called Superhero Sundays, where they interview designers/makers/artists after asking them to create their own version of Crafterella, the blog mascot. Crafterella is at least part cat and mine is no exception, although in my design she is a superhero saving the world from craft project catastrophes too (alongside her feline companion!).

Getting Ready for School

When Two Heads Are Better …

Around the World in 80 Day…

Pleased to Eat You

The Story of Eastbourne &#…

Things That Go Bump in the…

A Map of Brighton and Hove…

Art on a Postcard

Illustrator
Sheffield, United Kingdom
Tel: 44 (0) 7742659923
www.vickysworld.co.uk
I'm a freelance Illustrator from London, currently living in Sheffield. Over the last 15 years, I have worked on a diverse range of projects including Facebook advertising for Volk… Show more.

Drench Art Award Finalist, selected as one of the London Elephant Parade Artists

“Vicky is friendly and creative, and her style is bright, fun and very eye-catching. Working in stages from rough concept to finished art, she was open to feedback and willing to accommodate amends and a couple of extras along the way. It was an absolute pleasure working with her and hope I get the opportunity again in the near future.
— Yvey Bailey, Redactive

I'm a freelance Illustrator from London, currently living in Sheffield. Over the last 15 years, I have worked on a diverse range of projects including Facebook advertising for Volkswagen, card designs for Paperchase and a huge painting on a life sized model of a baby elephant for the Elephant Family charity. My style is graphic, colourful, nostalgic and quirky. I find inspiration almost anywhere; from the natural world and my urban surroundings in London, to stylish Art Deco architecture, psychedelic posters of the 60's and the wallpapers of William Morris. My illustrations are created using a variety of techniques including drawing, paper collage, paint and Photoshop, whilst maintaining the same eye catching and uplifting feel in all my designs.