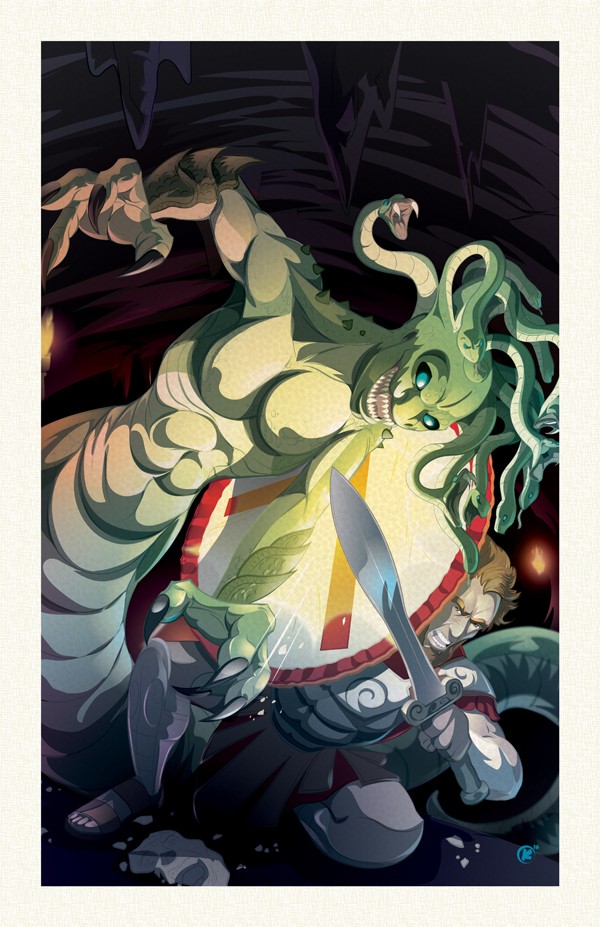 As a kid I loved comic books, the underdog hero fighting an over the top villain and winning an impossible battle. These stories always captured my imagination and sense of adventure. So, when I was introduced to Greek mythology, I couldn’t help, but see a direct correlation between comics and the Greek myths.

One of the creatures that I always found the most terrifying and most intriguing was Medusa. A creature with heads of snakes as hair, seriously? Snakes totally scared me to death, so forget about anything else, Medusa was hands down the scariest of all the Greek monsters. And the thought of Perseus taking on this creature, whose gaze could turn him to stone in an instant, made him the ultimate hero. Conquering his fears and beating a creature that he had no business fighting, let alone winning against, was just amazing. Maybe, I too could be a hero and conquer my fears and win battles that to me seemed impossible to win.

Here’s to Perseus one of the world’s first superheroes and his true heart of a hero, daring to inspire minds both young and old.

Bringing a character to li…

Rooting for the underdog

Day out with Daddy

Caught in the rain

The Warrior and the Thunde…

The Further Adventures of …

Illustrator
Overland Park, USA
Tel: 1-913-486-1413
www.universek.com
Kevin Myers has been working as a professional illustrator for almost 20 years. After graduating from The Joe Kubert School of Cartoon and Graphic Arts, he began working as an Illu… Show more.

Kevin Myers has been working as a professional illustrator for almost 20 years. After graduating from The Joe Kubert School of Cartoon and Graphic Arts, he began working as an Illustrator/Graphic artist for an internet startup company, BlairLake New Media. Kevin then moved to VML Advertising as an Illustrator and Senior Art Director. In 2001, Kevin founded universe K as a full-time Illustrator. He has never looked back. Kevin specializes in creating robust illustrations in various styles using numerous methods and techniques. As a professional, Kevin has worked with many clients directly and indirectly to turn their imagination to reality.