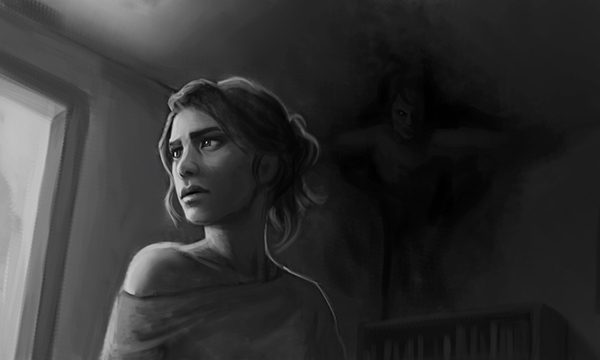 I started a challenge for myself on Instagram a couple of weeks ago called “Storyboard Saturday” where I paint a storyboard from one of my personal stories. Since it’s getting around Halloween, I’ve been focusing a lot on my ghost script, Nethergate. This is the storyboard piece I created for this weekend.

The Bard and the Wizard

The Warlock of Cthulhu

The Ladies of Vox Machina

Meaning in the Making R…

Champion of the Raven Quee…

The Mooncaller and Water W…

The Light of Zera

www.offbeatworlds.com…
I like to tell stories with my art. With a big influence from movies, my illustrations put a heavy influence on character, atmosphere, and lighting. Because of this, some have refe… Show more.

“"Stephanie did a wonderful job. I approached her with character ideas for a book that I had written, and she was excited to take on the project. Communicating with her was easy and quick. She responded promptly and in a timely fashion and answered all my questions. The work is great, high caliber work. She made adjustments when needed. Having illustrations done was probably the easiest part of my book marketing process thanks to Stephanie! I will definitely use her in the future."
— E. Paige Burks, author, Book Illustration

I like to tell stories with my art. With a big influence from movies, my illustrations put a heavy influence on character, atmosphere, and lighting. Because of this, some have referred to my style as "cinematic illustration." Because of my preference for scifi, fantasy, and horror, I have done a lot of work for movies, video games, RPG games, books, and graphic novels in those genres.