This image was inspired by the classic Greek myth called ‘Theseus and the Minotaur’. Unlike the stereotypical depictions of a gruesome, mindless, monstrous beast, I wanted to depict a different vision, exploring alternative perspectives, yet still loyal to the original text. My Minotaur is a prisoner within a black labyrinth, a broken creature isolated and sorrowful, ashamed by his deformity and devastated by the rejection of his mother.

The decision to hide the Minotaur’s iconic face was made partly to entice the idea that what you don’t see can sometimes be more effective.

It’s been great to get back to doing some mythology artwork. A whole year has past since I’ve been able to paint anything personal! This image is part of my long term plan to create an art book based on myths and legends. 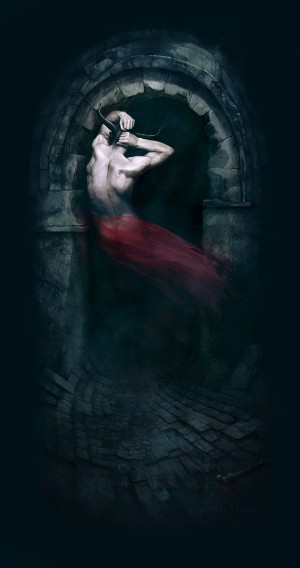 www.mike-nash.com
I'm Mike Nash, a digital Illustrator from the UK. My goal is to capture a believable fantasy, full of detail, depth, power and atmosphere. Over the past decade my work has been pub… Show more.

“Mike is professional, constructive and illuminating. He incorporates feedback, moreover, making artful choices which elevates the image further, to a level I unimagined. This collaborative spirit makes working with him wholly satisfying.
— Jeffrey B. Palmer, Writer/Director

I'm Mike Nash, a digital Illustrator from the UK. My goal is to capture a believable fantasy, full of detail, depth, power and atmosphere. Over the past decade my work has been published as book covers, interior illustrations, character designs and collectable trading cards within the fantasy and sci-fi industry. I welcome commission enquiries. Please contact me by E-Mail and describe the artwork you require. I will be in touch to discuss your project, answer any queries and set a fee for the work. Thank you for your interest, I'm excited to become part of your endeavours, I look forward to hearing from you!