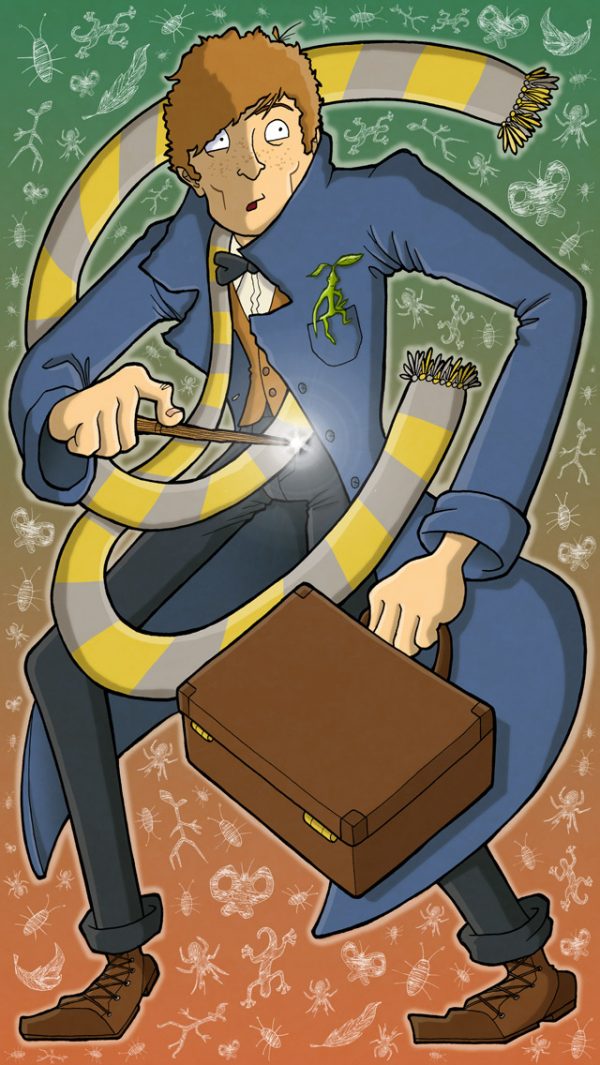 It took me a while to get round to watching Fantastic Beasts, but the moment I did I knew I had to draw Eddie Redmayne as Newt Scamander.

I struggled a bit to get his pose right. I wanted to fill as much of the available space as possible, so I gave him nice long arms and legs with a relatively small torso, and a mysteriously flailing scarf. It took forever come up with a background, but I think the cave-painting-inspired bugs and beasts do just the trick, since they reflect both Newt’s affinity for animals and his scatterbrained nature, as well as heightening that feeling of magic and mythology.

Geckos and Witches and Sno…

The Monster in the Closet

On Northern Lights and Gol…

Dragon of the Deep

Papa Cloaca, King of the S…

Breath of the Wild

“I have known Ollie Ray for some time now and, indeed, he became the illustrator for three of my books after I shortlisted him from a large number of illustrators who responded to my advertising. It was a decision that I have never regretted. As you will no doubt see from his portfolio, he is an accomplished young artist who is able to adapt his styles to suit most genres. He has proved to be a highly personable young man, dedicated to his work, affable - and a stickler for deadlines too!
— John Clement, Author, "Stories from Giant, Witch & Fairyland" and "Down at the Bookies"

Hi, I'm Ollie! I'm a freelance illustrator from the UK, specialising in cartoons, character design and children's illustration. A graduate of Winchester School of Art, I've illustrated three picture books and collaborated with a variety of creative clients including bands, promoters, film-makers, magazines and theatre companies. I'm currently working on an illustrated children's story and teaching myself how to animate! Please feel free to contact me with any questions.