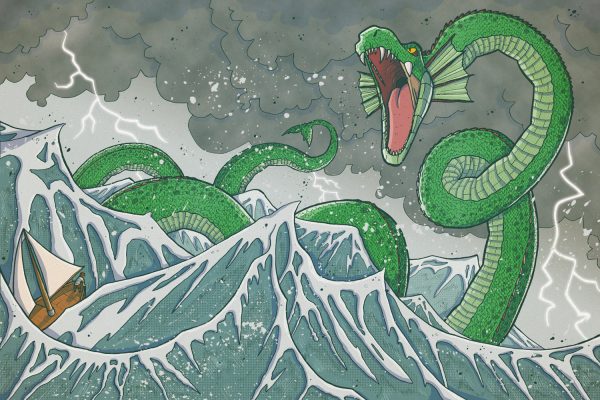 This was a piece inspired by the mythology of chaos versus order. Perhaps as a result of our evolutionary history, the primordial reptilian predator remains a powerful symbol in many major religions, and the motif of the great flood or tempest is one that recurs across cultures. I wanted an image to represent each individual’s struggle against these forces of chaos, in as simple and archetypal a way as possible.

The image was influenced in part by Hokusai’s famous “Great Wave off Kanagawa”. The rest was drawn from my own imagination.

Geckos and Witches and Sno…

The Monster in the Closet

On Northern Lights and Gol…

Papa Cloaca, King of the S…

Breath of the Wild

“I have known Ollie Ray for some time now and, indeed, he became the illustrator for three of my books after I shortlisted him from a large number of illustrators who responded to my advertising. It was a decision that I have never regretted. As you will no doubt see from his portfolio, he is an accomplished young artist who is able to adapt his styles to suit most genres. He has proved to be a highly personable young man, dedicated to his work, affable - and a stickler for deadlines too!
— John Clement, Author, "Stories from Giant, Witch & Fairyland" and "Down at the Bookies"

Hi, I'm Ollie! I'm a freelance illustrator from the UK, specialising in cartoons, character design and children's illustration. A graduate of Winchester School of Art, I've illustrated three picture books and collaborated with a variety of creative clients including bands, promoters, film-makers, magazines and theatre companies. I'm currently working on an illustrated children's story and teaching myself how to animate! Please feel free to contact me with any questions.