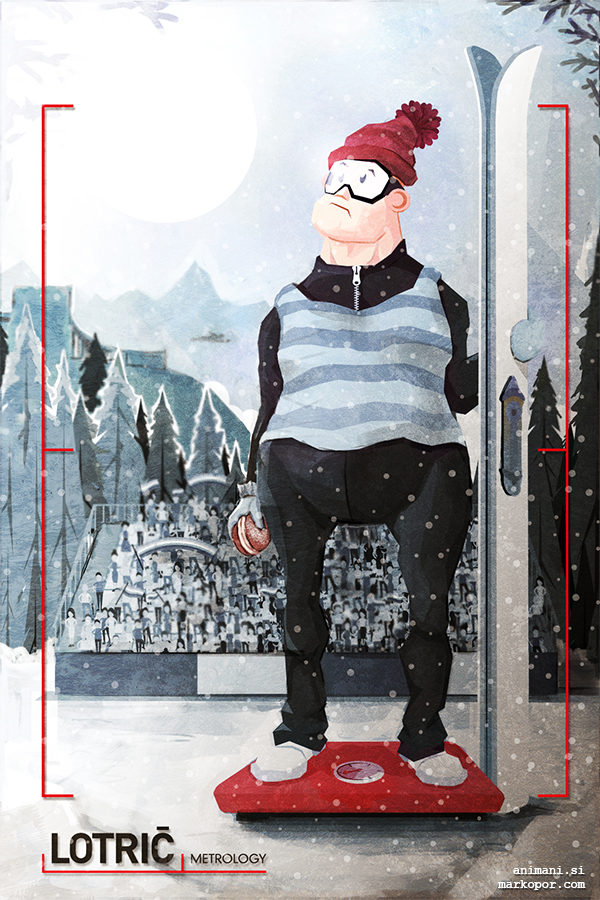 The first in a series of illustrations for Lotrič Metrology’s social media campaign.
It was published during the Planica Ski Jumping World Cup in Slovenia, where Lotrič Metrology was in charge of weighing the competitors. I’ve used a part of the company’s visual identity to more clearly hint at their role in the event.

Our character Jože didn’t make the cut this year. He loves ski jumping, but not as much as donuts.

Illustrator
Ljubljana, Slovenia
Tel: +38641618268
markopor.com
I'm an Illustrator / Concept Artist from Slovenia. In most of my works, you can find playful, cheeky characters traveling through picturesque landscapes with wacky architecture. Th… Show more.

“"Marko is a talented illustrator and did this job very successfully because he understood very well the style I wanted for my illustrations. He is very professional, always polite and he always delivers the work according to the schedule." - Guilhem Greco "Marko is exemplary in his good qualities. No problem understanding each other, work done at agreed times, high quality work. I would recommend him as an illustrator without hesitation. I am very pleased with the project he did for me." - Randy Resnick
— ,

I'm an Illustrator / Concept Artist from Slovenia. In most of my works, you can find playful, cheeky characters traveling through picturesque landscapes with wacky architecture. The best way to describe my style is "a rock concert at the beach". I use Photoshop, Illustrator, and Blender 3D to create concepts, storyboards, and illustrations, that can be used in animation pre-production or as final visuals for digital and traditional media. When I'm not working, I like to surf, snowboard, and hang out with my family and friends.