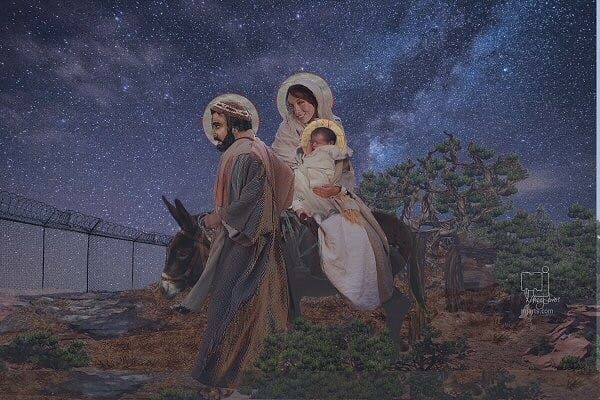 My entry for the 2019 CIVA Juried Exhibition, Are We There Yet? is entitled, Mary and Joseph at the Southern Border. The idea isn’t original; I’ve made my own ‘take’ on the idea that the United States Constitution grants the right for all refugees to cross American borders to request asylum.
Mary, Joseph and the young child Jesus, left Bethlehem and traveled to Egypt [without papers] in order to protect Jesus from death by Roman soldier, in what artists have called The Slaughter of the Innocents. King Herod, fearing his being supplanted by the foretold ‘King of the Jews’, prophesied by the Magi who visited him, ordered the murder of every child in the land that was under the age of two years.
Our own Autocrat wants the children stolen from their parents at the border and placed in foster care for the rest of their childhood. Our Autocrat readily admits that the idea is to make emigrating to America completely undesirable. “America is closed” for immigration business… unless the immigrants are from Norway or Sweden…
My mother was born in Norway; her family emigrated to the US in the early 20th century. My father’s maternal grandparents were Swedish and emigrated to the US in the 19th century.

‘A Scandal In Bohemi…