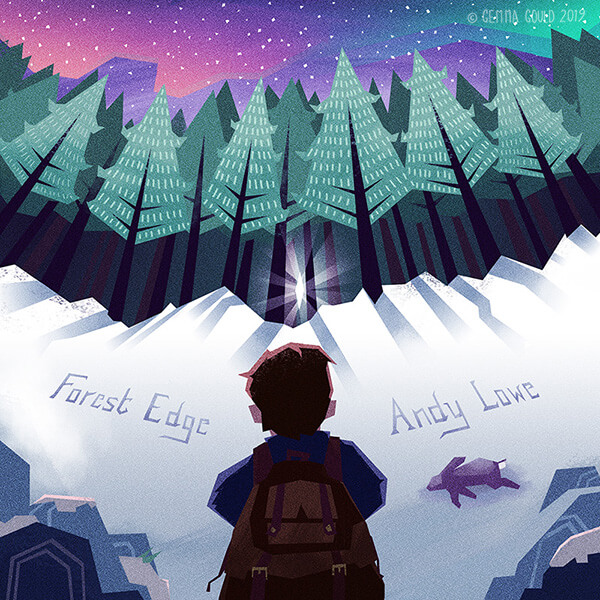 A recent project I had the pleasure of working on was the creation of a CD cover illustration for the EP release of ‘Forest Edge’ by client Andy Lowe.

His atmospheric music accompanies the tale of a boy who has lost his way and finds himself alone in a wintry wilderness. Before long, he encounters a mysterious forest and the secret held within helps to renew his fading hope.

I wanted to portray the boy upon his first discovery of the strange forest, with a hint of the mystery that hides inside it. I enjoyed playing around with exaggerated perspective and ambient colours, which serve to heighten the sense of the otherworldly and unknown.

Having never worked on an album artwork before, this project was a refreshing challenge! It was interesting working with both text and audio as stimuli; not only did the image have to fit the tone of the story but also the minimal and calming feel of the music.

“Gemma was, from the get-go, a pleasure to work with. Her illustrations are eye-catching, authentic and very thoughtfully designed. She knew immediately what my team were looking for when I came to her with an idea regarding our online magazine - she delivered exactly that and more!
— Hollie Mac, Alex and Alexa

Gemma Gould is a British illustrator, based in the beautiful Shropshire countryside. Drawing inspiration from traditional printmaking techniques, she combines vibrant geometric shapes with textured details and gentle humour to create charmingly quirky illustrations. Gemma has worked with clients worldwide across numerous markets, including children’s books, editorial and animation.