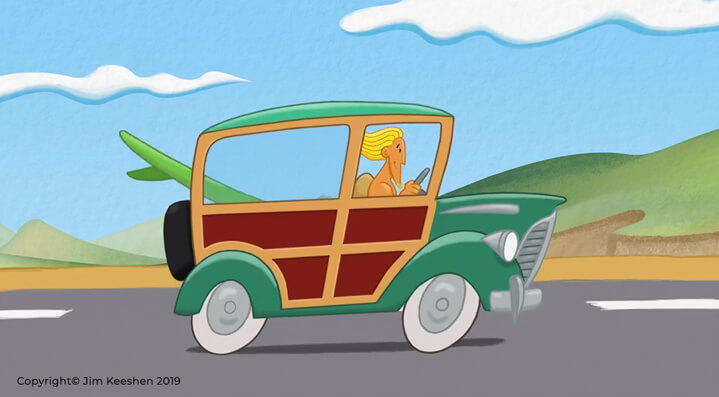 A while ago, I was involved in the making of a 2D short film called “Surfer Joe”. The film is finally ready and will be playing on March 9th at the Los Angeles Film Festival and on March 22nd at Animation Dingle in Ireland.
I worked on the concept art, clean up and backgrounds for the film in collaboration with many talented artists.

Part of your world

The Scoop on Inventors pic…

Character Designs for a Bo…

‘Til the music do us…

Graviton is ready on Steam…

Parrots in the Amazon Basi…

www.samjophan.com
I'm an illustrator based in California, United States. I've worked as a production artist for companies like Walt Disney Interactive, Jam City and IXL Learning. What I love about m… Show more.

“"Would hire Samantha again in a minute. This was a very challenging assignment. She did a wonderful, professional job."
— Michael Richter, Richter Games

I'm an illustrator based in California, United States. I've worked as a production artist for companies like Walt Disney Interactive, Jam City and IXL Learning. What I love about my work is to find creative solutions and come up with a visual language that can be recognized across the globe. Functionality, design, and humor are my main goals. In my spare time you can find me hiking the trails, crafting a fun project, or whipping up tasty recipes. My personal work is inspired by folk tales, nature and places I have traveled. I hope that through my work I can keep those stories and places alive.