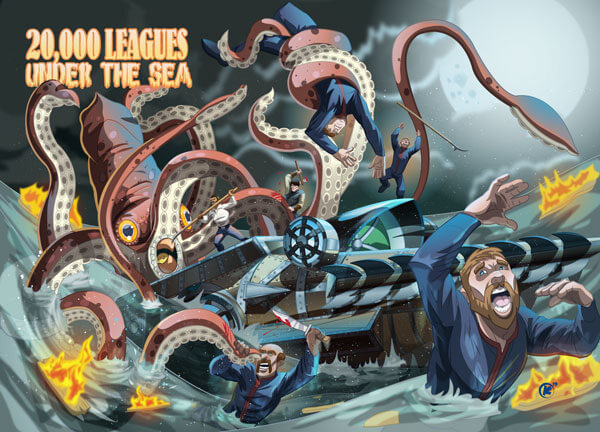 I was invited to submit a piece to the Jules Verne exhibit in London. I had a hard time deciding what piece of work by Jules Verne I would concentrate on, there are so many that can entice an illustrator. In the end, I simply wanted to draw a giant squid attacking the Nautilus. So having decided my direction the next task was to figure out the composition. I wanted the attack to be front and cente, with the sailors furiously fighting for their lives and the ship itself. I wanted to capture the epic struggle and hope that I have.

Bringing a character to li…

Rooting for the underdog

Day out with Daddy

Caught in the rain

The Warrior and the Thunde…

The Further Adventures of …

Illustrator
Overland Park, USA
Tel: 1-913-486-1413
www.universek.com
Kevin Myers has been working as a professional illustrator for almost 20 years. After graduating from The Joe Kubert School of Cartoon and Graphic Arts, he began working as an Illu… Show more.

Kevin Myers has been working as a professional illustrator for almost 20 years. After graduating from The Joe Kubert School of Cartoon and Graphic Arts, he began working as an Illustrator/Graphic artist for an internet startup company, BlairLake New Media. Kevin then moved to VML Advertising as an Illustrator and Senior Art Director. In 2001, Kevin founded universe K as a full-time Illustrator. He has never looked back. Kevin specializes in creating robust illustrations in various styles using numerous methods and techniques. As a professional, Kevin has worked with many clients directly and indirectly to turn their imagination to reality.