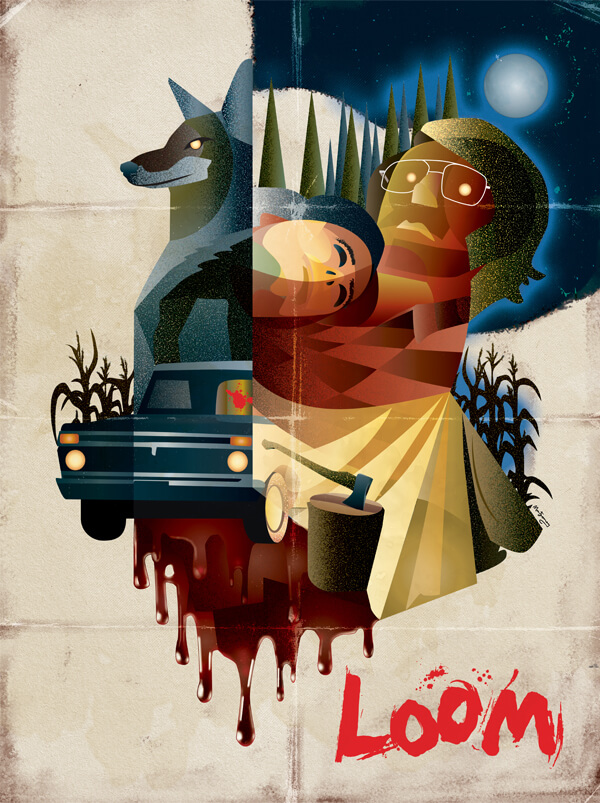 I designed the poster for the showing of the short film LOOM at the Rated SGF film festival this spring. The film is a visual love letter to 1970s werewolf movies, so I tried to make my image look as if a horror poster had been folded up and found in a closet after decades of mildew and rot. I used a lot of texture and more blood than I’ve ever drawn before! No real blood was used, however. The title was hand-drawn with a brush and ink and colored to mimic slasher movie titles in the ’70s and ’80s.

It was fun to research the colors and styles of movie posters from a time before they became overrun with photo collages. There has been a bit of a resurgence in illustrated blockbuster movie posters lately, and I couldn’t be more pleased. What a fun time to be an illustrator!

Illustrator
Springfield, USA
Tel: 1-417-894-7872
www.markamontgomery.com
Mark is an old soul from the suburbs of Kansas City. Some of his greatest inspirations are Jazz, Roots music, movies, Route 66, baseball and barbeque. He loves faces and how a humo… Show more.

Mark is an old soul from the suburbs of Kansas City. Some of his greatest inspirations are Jazz, Roots music, movies, Route 66, baseball and barbeque. He loves faces and how a humorous portrait or caricature can reveal so much more about a personality than any posed photo ever could. He is a strong believer that illustration will once again rule the world (in his lifetime). He still works and lives in the Midwest with his family. He eats dry ribs and takes the family to a movie every year on his birthday.