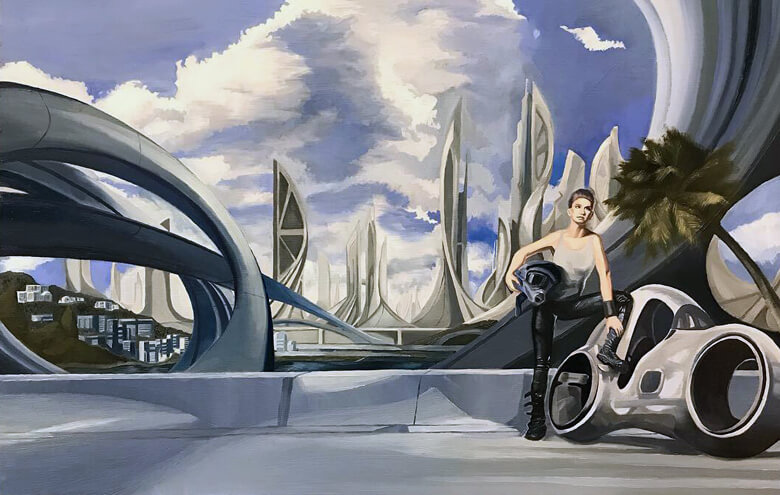 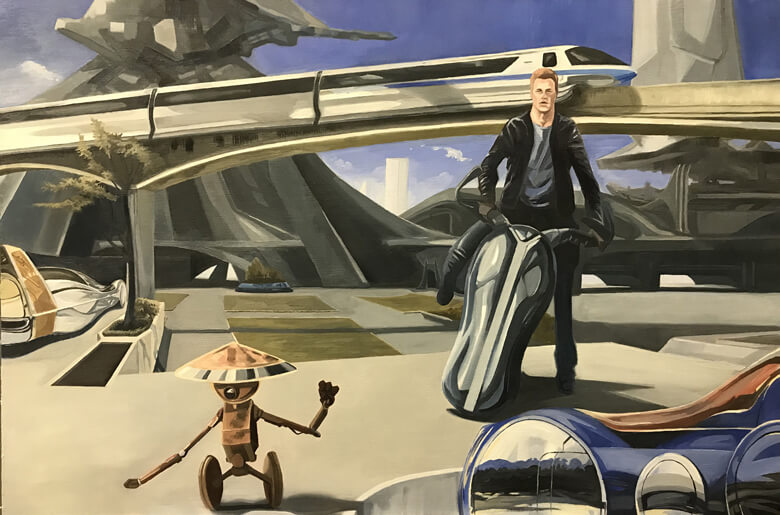 During my time teaching at the Atelier At Flowerfield I have begun work on a sci-fi painting series based around my creator-owned IP “Space Crusaders”. These are the first two of 10 entries. I will be releasing these every two months.

The first entry is “New Dubai” and represents a Utopian vision of what the city of Dubai might look like in 800 years. heavily inspired by ’70s era artists such as Syd Mead. I wanted some cyberpunk aesthetic to seep through in the design of the biker girl, and the bike itself, while overall trying to convey a sense of wonder and scale.

The second entry is “Dynamic Duo”, and in this I wanted again to convey a sense of awe as well as scale while peeling back the curtain on what sorts of technology exists in the 28th century. We have crazy droids and sleek streamlined cars, as well as mega structures which function as a transportation hub. I was heavily inspired by the Epcott Center and the design of the monorail at Disney for this piece.

Book cover for Marquette B…

I am an Art Educator and Commercial Artist specializing in Scifi Art and Serialized Illustration based out of Long Island NY. I have worked in comics for a number of years through … Show more.

“I asked James to design a cover for my new dystopian novel, and I was thoroughly pleased. He brought the characters in my book to life. James was very responsive to my needs, and easy to work with. I highly recommend him. -Dr. David Demers, Phoenix, AZ
— Dave Demers, Publisher - Marquette Books

I am an Art Educator and Commercial Artist specializing in Scifi Art and Serialized Illustration based out of Long Island NY. I have worked in comics for a number of years through the Glasshouse Graphics talent agency as well as various indipendent projects. I am currently working on a creator-owned comic book called 'Two Worlds' as well as a series of related science fiction retro futurist paintings inspired by the retro-future and cyberpunk genres. Past collaborators include Karen Traviss, author of The Clone Wars, and Halo novels. I grew up in Port Jefferson Station NY and lived in NYC for 6 years while studying Art at Pratt Institute. I am based in Eastern Suffolk and I teach locally at several Art Schools, and my main studio is located at The Atelier At Flowerfields in Smithtown NY.