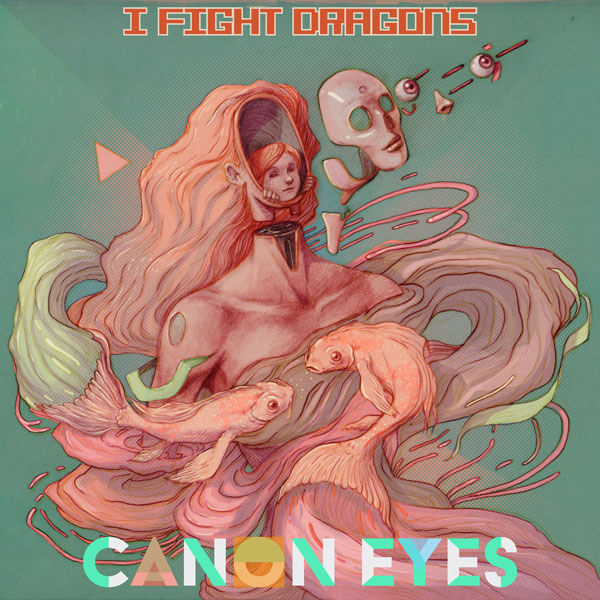 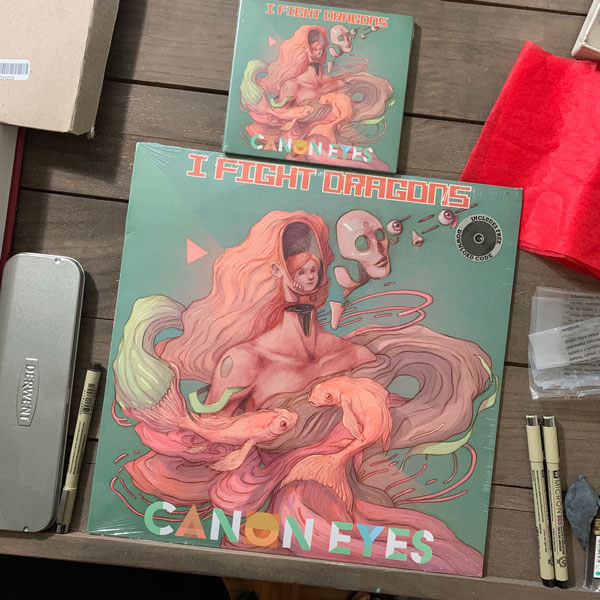 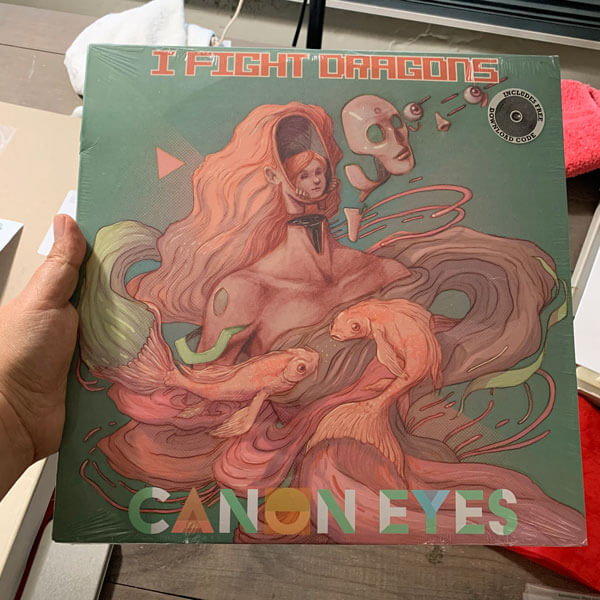 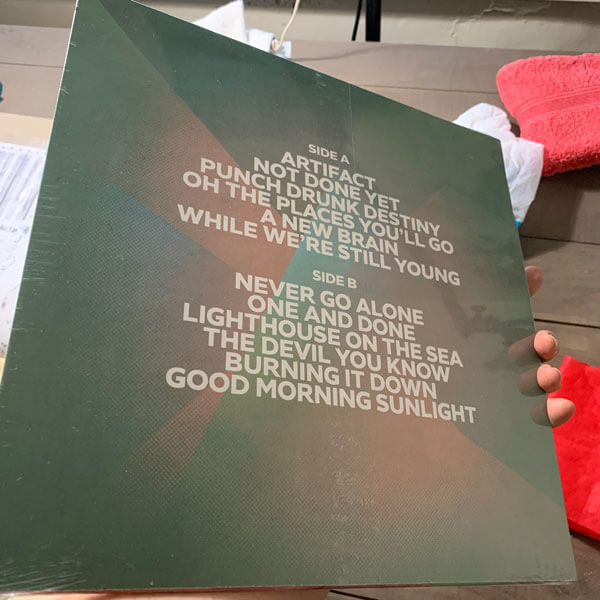 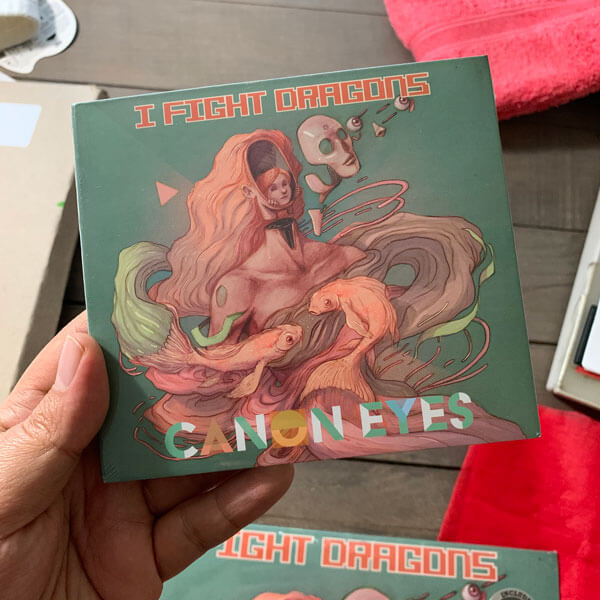 The band I Fight Dragons commissioned me with the illustration and design of the cover of their new album “Canon Eyes”. The brief for the album cover was to create an image that reflected and conveyed the idea of legacy, birth and rebirth that this new album’s songs talk about and reference.

The band approached me regarding one of my deconstructed figure illustrations, as they felt that this kind of imagery resonated with the ideas behind the album, so that was my starting point for the illustration. I suggested the Koi fish elements as they represent perseverance and transformation, and in some legends, Koi fish that swim many times against the stream of rivers turn into dragons, so I thought it was a perfect match for the concept of the album and also to tie it to the band’s name.

The child taking a peak from inside the female figure represents the inner child that lives inside us and that, in my personal point of view, is really important to reach when you want to reinvent and transform yourself.

Mr. Flama has not submitted any more news.

Illustrator
Tlalnepantla, Mexico
Tel: 015512959771
mrflama.com
Luis Torres, aka Mr. Flama, studied at UAM Azcapotzalco in Mexico City where he got a Bachelor Degree on Graphic Design and Graphic Communication. With 25 years of experience in g… Show more.

Luis Torres, aka Mr. Flama, studied at UAM Azcapotzalco in Mexico City where he got a Bachelor Degree on Graphic Design and Graphic Communication. With 25 years of experience in graphic design, advertising, animation, motion design and visual arts, Luis has received several national and international awards for his work throughout his career. Initially, he worked in various advertising agencies from story board artist to associate art director, including J. Walter Thompson, Leo Burnett and Grey World Wide. His work as an Art Director was recognized with several awards in advertising campaigns for brands such as Kellogg's and Direct TV. Seeking new challenges, he decided to leave the advertising world and move to the production and animation industry, where he worked at Virgin Studios Mexico and Spin Productions Toronto as motion designer and art director respectively. Fulfilling his cycle at Spin, he decided to become independent and began freelancing, working with studios like Cuppa Coffee and The Juggernaut and was part of the roster of directors at Spy Films and Resistor (then The Electric Company) in Toronto, he was also represented by Curious Pictures in New York as animation director. He returned to Mexico, and funded his animation and design studio “La Flama" that for 10 years provided services both in domestic and international markets in the advertising and entertainment industry. On May 2017, Luis decided to terminate his work relationship with "La Flama" as partner and creative director to focus more in his illustrator, designer and motion designer work; rebranding himself as Mr. Flama. In October 2017 Luis joins ventures with Cluster Studio as Creative and Animation Director. In 2019 he assumes the role of Head of Studio along with his Creative and Art director duties at Cluster Studio. Luis's work has been published in 2 books from Taschen: Logo Design vol. 2 and Latin American Graphic Design, and in magazines and specialized media such as IDN, Stash (in which his work has appeared several occasions), Territory, Matiz, Big and Forecast magazine in Zurich. He also has been interviewed on online sites dedicated to design and animation such as designtaxi.com, motionographer.com, stashmedia.tv and wired.com, the latest interview in which he appeared was on the ”Art Wanted!” section of Rebus Farm website on February of this year (2019). His paintings have been exhibited in New York at Agora Gallery and Resistor Gallery in Toronto. In 2010 Luis won two gold medals at the New York Festivals 2010 for his animated short film "The Hollow" in the category of best direction and best animated short film art direction, in addition to being nominated for best animation in the festival. In 2012 Luis worked in the video for "Occupied Tears" by Serj Tankian, the video was nominated for best video clip in the New York Festivals 2012. Luis got and honorable mention in the XXII Catalog of Illustrators for children and youth publications FILIJ 2012 and was selected as part of the illustrators that appeared on the XXIII Catalog of 2013 . In 2013 Luis was selected as one of the illustrators for the Mail me Art project and was judge in the area of animation on Quorum Year One 2013 awards. The campaign “120 years” for Indio Beer by the agency Double You won the Grand Prix of Circulo Creativo 2013 in the category of "Best Digital Campaign", Luis directed and animated the video spots for the campaign. In 2014 the animated spot “Elephant, Bomb, Ninjas, Zombies” for Toronto Crime Stoppers, won a trophy as finalist in the category of Art Direction of the New York Festivals 2014 Best World Advertising. In June 2016 Flock Advertising Agency’s “Nike Mov Your Way” campaign won gold in the digital category of the Festival Iberoamericano de la Comunicación Publicitaria in Bilbao Spain. The project consisted in doing personalized animations delivered to runners via twitter daily. Luis was the animation director on this project and developed the work flow to achieve the delivery of the animations and also art directed the project on the animation part. At the end of the campaign 750 personalized animations were delivered in a period of 6 weeks. On November 2016 luis was part of the jury for the Advertising category of the Cut Out Fest 8th Edition. Finalist for the Latin American Illustration Award organized by the Palermo University in 2017. Selected artist for the exhibition "Arte ABC" organized by the Javier Marin Foundation, the exhibition was shown at Plaza Luis Cabrera in colonia Roma. Selected as an artist for the “Amazing Adventures: Art inspired by the works of Jules Verne” exhibition at The Framers Gallery in London organized by Hire an Illustrator and The Little Chimp Society on April 2019. Luis was invited to be part of Drawn Volume.3, Leaders In Contemporary Illustration book published by Capsules Book coming on July 2019. Recently Luis just finished the Album cover for the band I Fight Dragons, the album will be released by the end of July 2019.