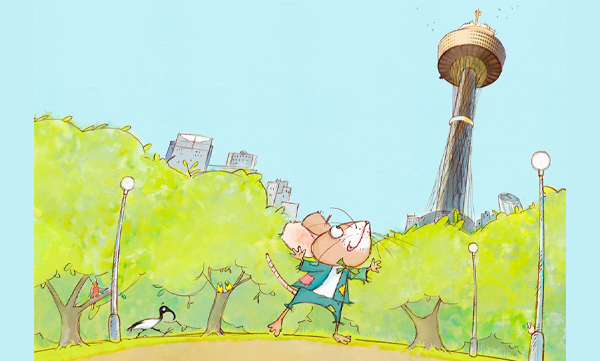 Time for some more mousy capers!

Sydney Opera Mouse was a book I illustrated for a self publisher, living in Australia, last year. It is now on sale at the Sydney Opera House shop – I think. I had to create the mouse character with quite a few human characteristics – hence the little outfit. He also had a few other human traits. He runs, jumps, sings and looks in wonder at Sydney tourist landmarks and generally gets into a few scrapes along the way. I shared some of the artwork from this book last year, but thought it appropriate to share some more. The story itself is a kind of rags to riches plot with the mouse eventually singing at the Sydney Opera House.

This is a full page illustration of Sydney Opera Mouse, exploring Sydney, Australia. Can you guess the landmark? I have genuinely forgotten what it’s called, but I know it’s hugely famous.

The whole book was written around Sydney’s tourist landmarks, which presented a challenge for me at times. I found myself drawing complex bridges, towers, aerial views and lots of architecture. I’ll be honest here and say that drawing those kinds of things are not top of my list. In fact I find them quite challenging, but I tried my best. I will leave it up to you to decide if I did a good job!

The story had a dolphin, a seal, a spider, a host of pet shop animals and lots of mice. Here are a few of the other characters illustrated. The first is Benny the Seal. Then we have Diane the Dolphin, and Sydney with Same the Spider. Benny is apparently a very famous seal that lives next to the Opera House.

Character Design for The P…