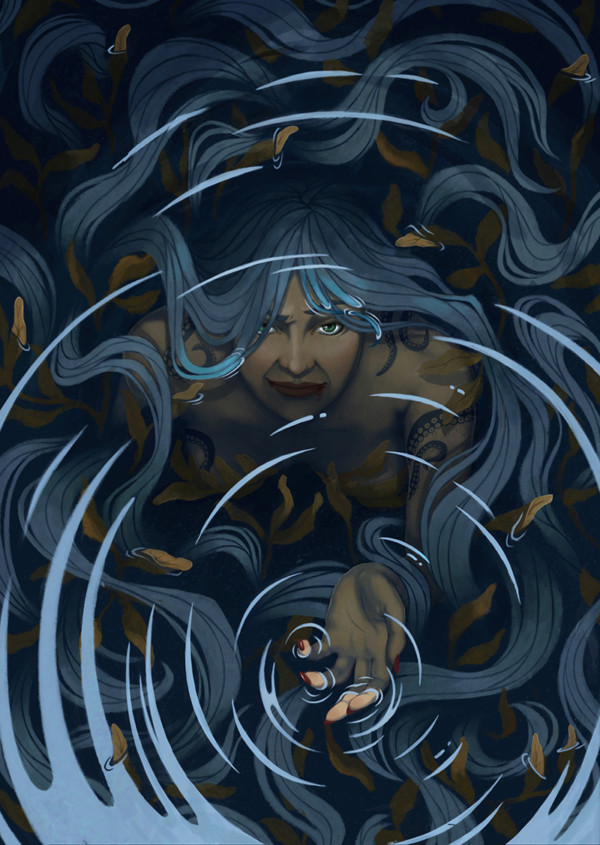 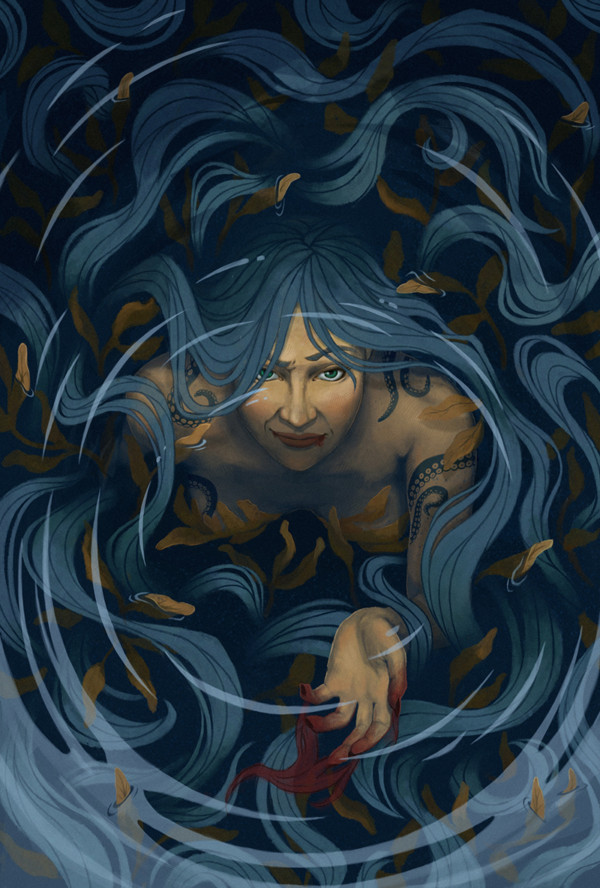 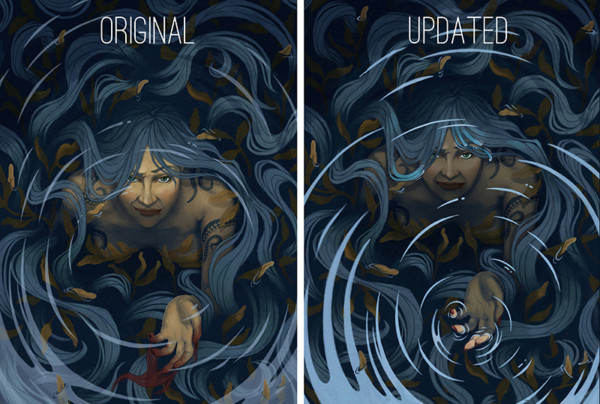 This illustration was originally completed back in the Spring of 2020, but I wasn’t completely satisfied with the finished product. Last month I went back and attempted to improve it, and I think I was successful! Here are a few of the things I changed, and how I think it helps the final:

– Facial features: I had gotten some feedback that her nose was a bit large (I have a somewhat big one too so maybe I have a bias toward large noses!), and I realized that her hairline was maybe a bit high. I also tried to shade and texturize her face a little more, partly to make it appear that her head was angled up (chin deeper in the water than her forehead).

– Waterline: Other feedback had informed me that it was hard to tell that she was underwater, and it was suggested that I pull her hand partially out of the water to provide contrast. I think this is one of the best changes I made to this image, and it makes it so much more interesting to look at. I also pulled a few pieces of hair out of the water so that the effect was spread out throughout the image.

– Removed the blood cloud from the water around her hand: this just didn’t seem necessary, and some people giving me feedback had said it was confusing visually.

– Moved the ripples: This was one piece of feedback that I have a love/hate relationship with. My astute brother-in-law suggested that realistically, any ripples would be surrounding the hand that had just partially emerged from the water. I knew he was right, but I also was slightly miffed because it was a large change to make! In the end – it ended up being one of the best decisions I made in this process. I had really liked the centered look before, but now I think that the ripples/light reflection shapes being off center and lower on the image make it a lot more interesting. Thanks, bro-in-law!

– Figure darkness: Also suggested by my bro-in-law. Making the mermaid darker in the water definitely added to the sense of her being UNDER the water. This made it necessary to lighten the color of her eyes so that they were a focal point in her otherwise dark face, which made her look even creepier (a good thing in this case).

You’ve probably noticed throughout this article that I’ve referred to receipt of feedback from other people. I’m currently a part of a Facebook group started by the amazing illustrator Loish that provides critique on illustrations when requested (if you’re an artist, go join it! It’s open to anyone wanting to improve their illustration/drawing). I’ve gotten a lot of good critique on images in the past, and it was the feedback I received on this image that helped me make it better in the second revision. Most often, I rely more on the critique that I ask for and receive from friends and family, which occurs throughout the image process.

It’s interesting to me that I, the artist, can’t always see the flaws in my work. I really appreciate and love the help I get from those I live near, because they help me weed out the issues early on in the process. The online group, when I do use their feedback, helps me to improve the final product even more! This process of critique makes me a better artist.

Draw-Along with Society of…

Fan art for Ghost of the G…

www.jenniferbruceart.co…
Jennifer Bruce is a Michigan-based artist. She graduated from the College for Creative Studies in downtown Detroit with a Bachelor’s in Illustration (and a minor in Concept Art).… Show more.

“Jennifer took some vague ideas I had and turned them into the best cover art of any of my books so far. She was super easy to work with, and she truly cares about the quality of the final product. I'll be certain to work with her in future!
— Timothy Scott Currey, Author

Jennifer Bruce is a Michigan-based artist. She graduated from the College for Creative Studies in downtown Detroit with a Bachelor’s in Illustration (and a minor in Concept Art). Her style of illustration mixes a foundation of traditional media with the ease and flexibility of digital media. Her digital paintings combine semi-realistic figures with graphic elements, texture, and pattern. She draws inspiration from nature, beloved works of fiction, and her favorite cinematic and electronic/indie-pop music. Her focus is Children's and Young Adult Literature, specifically on book cover art.