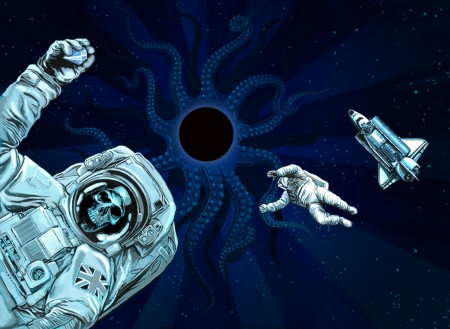 Out in the shops or to order online now is this great hardback coffee table book called SciFi Art Now edited by John Freeman and published by Ilex in the UK and HarperCollins in the US. Here’s the description of the book from the Ilex site:

“This perennially popular genre always attracts the most visionary artists, and this book showcases the crème de la crème of contemporary science fiction painters, illustrators and creators. All aspects of classic science fiction themes are given a fresh perspective by artists examining popular sub-genres such as Sirens of Sci-Fi, Spacecrafts and Spacenauts, Aliens and Alien Worlds, Radical Robots, Incredible Cities, Future War, and Steampunk. Crammed full of exquisite art from around the world and fascinating insights from the artists and creators, Sci-Fi Art Now is perfect for fans of the science fiction genre, whether in movies, computer games, comics, book covers or illustrations.”

When I was a young boy there was a slew of sci-fi books that nearly all boys who liked the genre would no doubt have owned. These where all brought on by the interest generated in sci-fi by the release of Star Wars and books by Asimov and the like. Here’s a few examples of the kind of book I mean. Spacebase 2000 by Stewart Cowley published by Hamlyn in 1984. It was a collected edition of two books Spacecraft 2000-2100AD and Great Space Battles printed under the TTA (Terran Trade Authority) banner which had released four books all about the future space travel of mankind. Alien World: The complete illustrated guide by Steven Eisler published by Octopuss in 1980. The Flights of Icarus by Donald Lehmkuhl published by Paper Tiger in 1977.

All of these books featured amazing art throughout and I was exposed to these masters of painted sci-fi art long before I discovered comic sci-fi art in 2000AD. Artists such as Jim Burns, Roger Dean, Angus McKie, Syd Mead, Ian Miller, Tim White, Bruce Pennington, Chris Foss and many more. Art tutors always say ‘study the masters’ well for boys my age into sci-fi and fantasy we certainly did. These guys set the bar very high. I would go into the town library and search through the small paperbacks to find the covers which featured these fantastic artists and therefore be exposed to the written work the cover had brought me to. As the years rolled on the artists themselves had collections released of purely their work, so instead of a mixture of art styles you’d buy large collections like Diary of a Spaceperson by Chris Foss or Medusa by Chris Achilleos.

The release of SciFi Art Now to me is like stepping back to those days of the late 70s and early 80s, a brilliant collection of sci-fi art which I’m very proud to say my work features in. I have two pieces in the book and in keeping with those earlier books and artists both where created traditionally with brushes and paint on stretched board. I do love to paint but I rarely find the time to do so and rely on my pens and computer to finish my illustrations. So its another treat for me to have paintings finished by hand in the book just as it’s an amazing thrill to have my work featured besides some favourites artists like Bob Eggleton, Rian Hughes and Dermot Power. Also its great to see so many friends and artists whose work I rate highly and have grown in skill and style such as Matt Soffe, Vicky Stonebridge and my Scotch Corner colleague Gary Erskine.

To top it all off the forward to the book is written by the legend that is Chris Foss accompanied by one of his startling spaceship paintings. From a ten year old boy devouring the art in Spacebase 2000 to having my work in a book with THE Chris Foss, I guess you could say I’m pretty happy with that!